The Loyal Nine and the Boston Brahmin continue their struggle to rebuild the United States while going up against a third term president.

Akart’s 6th and final novel of The Boston Brahmin series, Choose Freedom, is written in an almost outline style. I loved this series and was totally disappointed in this book. It’s as though the author was in a hurry to be done with it. Instead of a complete story there are lots of fits and starts. It is very disjointed. Things just happened with no explanation. Too much was left for the reader to figure out on their own.

It breaks my heart to give this book a review like this.

Sarge is in charge. Henry Sargent has been named the new head of the Boston Brahmin by J.P. Morgan who recently suffered a stroke. The president has brought in UN peace keeping forces due to the uprisings against the Citizen Corps. New conflicts arise both nationally and personally.

Akart’s fifth novel in The Boston Brahmin series, The Mechanics: A Post-Apocalyptic Fiction Series, is every bit as action packed as the first four. And, what a heart-stopping ending! Oh, my! This may very well be the best book of the group.

This book, as well as the others, is a must read for anyone who wants a glimpse of what could very well be our immediate future. While Akart is not a prognosticator, his novels are eerily realistic in today’s political climate.

The power grid is still down with no signs of near term recovery. Martial Law enforcement is heavy handed against those not loyal to the President. Civil unrest, murders over resources, people dying of starvation and lack of water, and minimal health care are the norm.

Bobby Akart delivers again with the fourth book of The Boston Brahmin series, False Flag. He puts together an intriguing mix of survival and strange bedfellows. This novel picks up immediately where book three ended. I appreciate Akart providing a brief summary of the story from the first three books. That, and the list of characters helped refresh my memory and allowed me to dive right into this one.

We get an in-depth look at the inner workings of the Citizen Corps Region I Governor’s office, and how it conflicts with The Boston Brahmin. The President throws out a false flag with regard to the responsibility for the grid collapse when he speaks to the nation and the world. The Loyal Nine find more pieces to the puzzle and start connecting them together.

Akart does a great job of bringing history in without it being overwhelming. The characters are interesting and add flavor with their diverse personalities. The end caught me completely off guard which does not happen often. The only weakness I found in this book was a smattering of passive voice and adverbs which detracted from the action in the story.

I recommend this book and give it 5 out of 5 stars. 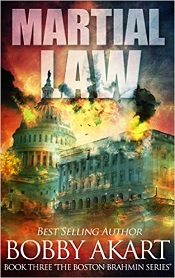 The second half of our double shot with Bobby Akart focuses on the next book in The Boston Brahmin series.

The power grids on both sides of the contiguous 48 are knocked offline by a cyber-attack orchestrated by John Morgan of The Boston Brahmin using the Zero Day Gamers’ hacking abilities. All of the lower 48 except the great state of Texas has lost electricity and it could take years to fully restore. The President is on vacation in Hawaii where he will maintain his office and declare Martial Law.

Akart does not disappoint in the third installment of The Boston Brahmin series, Martial Law. This fast paced political/apocalyptic thriller will keep you on edge from beginning to end. We follow the Loyal Nine as they make their way to Boston through the breakdown of society that occurs within the first four days after the blackout began. We see them start to question the role The Boston Brahmin is playing in the events as they unfold.

The setting is two months before the presidential election. With the USA in chaos will the sitting president rise to the occasion or will others take this opportunity to decide America’s fate? The situation is all too real in the realm of possibilities based on what is currently happening in the world today.

I am chomping at the bit for the next book in this series. 5 out of 5 stars.

The best way to describe this book is that it is a terrifying look at what could actually happen to the USA in the very near future on an economic and political level. Cyber attacks escalate all around the globe throwing the USA into what is termed a Cyber War. The sitting president seeks to extend his term beyond the 8 years that are coming to an end through threats of martial law and the suspension of Posse Comitatus. And, The Boston Brahmin is using all of this for their financial gain.

Akart’s book, Cyber Attack, The Boston Brahmin Series Book 2 follows the struggles of The Loyal Nine as they prepare for disaster while following the direction of John Morgan and The Boston Brahmin. This very frightening look at a real world possible outcome for the USA is thought provoking and enlightening.

If this book doesn’t cause you to think, I don’t know what will. I can’t wait to see how it all ends. 5 out of 5 stars. 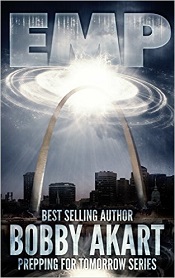 What is an EMP? Is the EMP threat real? Is the USA doing everything in its power to shield itself in case of an attack? Are YOU prepared? This is not a tin hat, conspiracy theory book. If you want to become better informed as to what the capabilities are of both the USA and abroad in terms of EMP warfare then this is the best book for you.

Akart engages the reader with an in-depth discussion in his latest book, EMP: Electromagnetic Pulse: Prepping for Tomorrow Series. He does an excellent job of explaining what an EMP is and providing the history behind it. The book goes on to tell you what you can do to prepare for an event. All of the information has been thoroughly researched and can be easily verified if needed.

You will certainly want to add this book to your reference collection. 5 out of 5 stars.

Today’s selection is by Bobby Akart. He is very detailed and thorough in his research. I can’t tell you how much I love his books, both fiction and non-fiction. If you like political thrillers, you will enjoy his books. If you wanted to know about prepping, you will enjoy his books. With that said, here is a five star review for the first book in the fictional series The Boston Brahmin.

Is the USA doomed to fall as has happened to every empire throughout history? With social unrest rising to the point of demonstrations and riots due to adverse economic conditions it appears the collapse of the USA is coming a break-neck speed. Who will protect her from those that seek to overtake her? Can The Loyal Nine under the direction of John Morgan and The Boston Brahmin, direct descendants of the founding fathers return her to her former greatness?

Akart’s book, The Loyal Nine (The Boston Brahmin Book 1) is very well written and contains a wealth of history and intrigue. The setting is contemporary and draws from events that are dominating the news in the USA and abroad. The main focus of this book is the development of the characters and providing scenarios that could bring about the downfall of the USA, such as the most often ignored real threat of cyber attacks.

It will leave you wondering who really controls the world economy. I am looking forward to reading the rest of this series.