Dale Hardy, his daughter Brooke, and his nephew Colton along with Dale’s German Shepherd Duke are surviving outside of town on his family’s land in Arizona after a devastating virus has killed many of the population. Folks show up every day at their gate asking for food and water or try to steal it during the night. A corrupt mayor and Sheriff try to force Dale to give up everything he has worked for.

Webber’s first novel in the Defending Home series, Defiance has a little bit of everything from property rights to romance. The characters are well developed in the story is fast paced. The story is told from both Dale’s point of view and that of those that are against him.

The book ends with a cliffhanger that makes you want to read the next one.

Lucas Shaw now commands an army of over 5,000 after the death of his good friend Art aka The General from lung cancer. Sierra chased after him with the children and are part of the ever-growing group headed to Houston. The Cartel has successfully rid most of Texas of The Crew with the help of the Illuminati. It is Lucas’ intent on driving The Cartel and the Illuminati out of Texas and restoring some semblance of order. The price he will pay will be very, very deadly.

Blake’s tenth novel in The Day After Never series, Rubicon Follows the Freedom Army as they encounter resistance in their quest. Though Lucas is a natural-born leader, he has never wanted to be in that position. Discord is rife within The Cartel and the Illuminati Which could work in Lucas’ favor.

The conclusion of this novel reads as though it is the conclusion to the series. It will be interesting to see if Blake decides to go further is the story.

Anthony Delgado has just been released from serving a five-month sentence in jail for a barroom fight. With no job, no house, and nowhere to go he heads to Florida’s West Coast. There an eccentric gentleman name Irish John befriends him and teaches him the ways of a simple life of living off the sea. Irish John goes on to help Tony find a job as a diesel mechanic at a boatyard. Just when things are going well everything gets complicated.

Craven’s first novel in The Dangerous Gulf Sea Adventures Series, Deadman’s Cay is a refreshing story about friendship. It meanders a bit while setting the backdrop for the overall tale. Most of the folks within the story are either related or all go to the same church.

When Tony’s lady friend gets caught up a plot by the Cartel not once but twice, Tony finds he has no choice but to assist in their destruction.

Four out of five stars.

Lucas Shaw is settling down with Sierra and the children in Provo, Utah. A deathbed promise puts his loyalties to the test and threatens to tear his family apart. Meanwhile, the Illuminati continues to take power throughout Texas with whoever will lie in bed with them. The Crew, though it has been decimated by the Cartel, is trying to make a comeback.

Blake’s 9th novel in The Day After Never series, Nemesis finds Lucas making strange bedfellows with the same goal of defeating the Illuminati and liberating Texas. As always, the story is action-packed and fast-paced.

I’m not exactly sure where the story is going to go but it’s obvious that there are several lore novels left in this series. 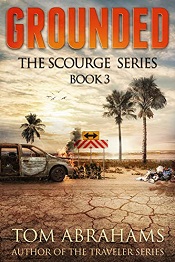 Mike Crenshaw, his girlfriend, and his best friend decide it is time for them to search out family in hopes that they have survived the Scourge and/or the upheaval that followed. The remainder of their group stays on to search out the rumored utopia of central Florida. The government is desperately trying to re-engineer the virus to suit its nefarious purposes. And, the Cartel is taking hold in the territory formerly known as Texas.

Abrahams’ third and final novel in The Scourge series, Grounded follows each group as they grapple with the new normal. Life is hard; and survival is harder. There are several story arcs to follow. Some tie directly to The Traveler Series. Others follow the new characters.

It is interesting to see how many of The Traveler Series supporting characters arrived in their positions. Though in at least one case the plunge in their career is not fully developed.

Ezekiel (Zeke) Watson left his girlfriend behind as he escaped certain death from his employers, the Tic a black-market cartel. The Tic battles the Overseers, some call them the government, for control of water. Nearly dead from being chased, Zeke stumbles on the property of a bar. But, it’s not any bar; it’s the bar at the end of the world.

Abrahams first novel in The Watchers series, The Bar at the End of the World is an odd mix of post-apocalyptic, dystopian, and paranormal. He does an excellent job of blending the genres to create a fascinating tale of redemption. I’ve never read anything like it, nor have I seen any other books of a similar nature.

Zeke’s character was well developed and while not the nicest person on the planet, he was relatable. The storyline is full of surprises and takes you through a maze. There is even one big ‘gotcha’ twist that makes you want to start all over from the beginning to see if you can pick up on the clues.

Ryan Decker has returned but is now working with Harlow Mackenzie and company. Border patrol personnel are killed in an odd set of circumstances involving an explosion south the border. Senator Steele calls upon Decker to investigate privately for her. Now, the entire group is in danger. Will they be able to expose the cover-up without losing their lives in the process?

Konkoly’s second novel in the Ryan Decker series, The Raid follows Decker after his life was almost destroyed by a deep state conspiracy.  The spark that was ignited between him and Harlow is fanned a bit throughout this book. Old nemeses don’t seem to want to go away.

This story is full of action and adventure as one might expect. But what I found most intriguing was the characters. The support crew is very diverse and add levity in some of the most serious situations. As with the first novel the story touches on human trafficking.