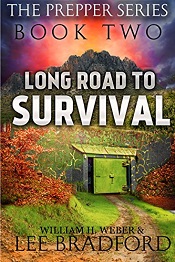 Paul Edwards and his family have found relative safety in a government bunker that seems too good to be true. They soon find out that there are many secrets and none of them are survivable. Again, Paul’s father in law, Buck teams up with them this time to find a way out.

Bradford’s and Weber’s second novel in The Long Road to Survival: The Prepper Series Book two seas America’s society continually dissolving. Danger comes in many forms. And, it appears the most dangerous threat to their safety is man-made.

It is interesting that this is only a two-book series. While the ending was quite sad it was also very satisfying.

Paul Edwards’ wife and daughter are a thousand miles away in Atlanta when multiple ports throughout the United States are devastated with nuclear bombs. He is determined to bring them home to Greenwood, Nebraska before the nuclear fallout reaches Atlanta. Before he hits the road his father in law, Buck joins him on the long trek. The only problem is they hate each other.

Bradford’s and Weber’s first novel in The Long Road to Survival: The Prepper Series explorers how to complete opposites can work together for the common good. They find out that their differences complement each other, and that they are actually a pretty good team.

This story is told from the points of view of Paul and his wife, Susan. While Paul and his father in law are on their way, Susan and their daughter Autumn must fight to survive on their own. Buck provides comic relief and a wealth of prepper knowledge.

Lucas Shaw now commands an army of over 5,000 after the death of his good friend Art aka The General from lung cancer. Sierra chased after him with the children and are part of the ever-growing group headed to Houston. The Cartel has successfully rid most of Texas of The Crew with the help of the Illuminati. It is Lucas’ intent on driving The Cartel and the Illuminati out of Texas and restoring some semblance of order. The price he will pay will be very, very deadly.

Blake’s tenth novel in The Day After Never series, Rubicon Follows the Freedom Army as they encounter resistance in their quest. Though Lucas is a natural-born leader, he has never wanted to be in that position. Discord is rife within The Cartel and the Illuminati Which could work in Lucas’ favor.

The conclusion of this novel reads as though it is the conclusion to the series. It will be interesting to see if Blake decides to go further is the story. 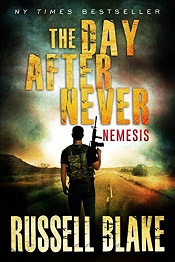 Lucas Shaw is settling down with Sierra and the children in Provo, Utah. A deathbed promise puts his loyalties to the test and threatens to tear his family apart. Meanwhile, the Illuminati continues to take power throughout Texas with whoever will lie in bed with them. The Crew, though it has been decimated by the Cartel, is trying to make a comeback.

Blake’s 9th novel in The Day After Never series, Nemesis finds Lucas making strange bedfellows with the same goal of defeating the Illuminati and liberating Texas. As always, the story is action-packed and fast-paced.

I’m not exactly sure where the story is going to go but it’s obvious that there are several lore novels left in this series.

Veritas Grey isn’t whom he thinks he is. When he discovers the truth, he finds himself caught in a fight for the future of humanity. The world is not as it seems. There are secrets dating back to the dawn of time that shakes the very core of man’s existence. Will Ver and his new friend, Selena do what must be done to tip the scales in their favor?

Blake’s latest novel, Quantum Synapse is the tired old tale where one man is the savior of the world. Add that to a retelling of The Matrix and you have a predictable story with no surprises. It has non-stop action and some cute moments. Otherwise, it isn’t all that interesting.

For someone with Blake’s talent, this is a major disappointment. No originality. The only redeeming quality is the fact that the main character is endearing.

Lucas Shaw wants nothing more than to go home and be with Sierra and the kids. He keeps getting sucked into battles keeping him on the west coast. When Shangri-La is attacked he is away in one of these fights and unaware of the danger to his family. With no reliable outside contact neither Lucas or the folks in Shangri-La know anything about the Crew and their plans. It seems nothing is settled and no one can feel safe.

Blake’s seventh novel in The Day After Never series, Havoc – Post-Apocalyptic Dystopian Thriller is another fast-paced, hard-hitting story. There seems to be no peace for anyone. New enemies emerge while others try to reestablish themselves.

I found myself immediately sucked into the book. Blake has a way of piquing your interest and teasing you with more. There’s definitely room for at least another 2 or 3 novels in this series. I hope that he doesn’t stop any time soon.