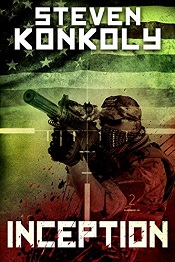 Daniel Petrovich starts out as the authority adverse, Lieutenant Junior Grade in the Navy. He goes on to become the cold-blooded assassin, Marko Resja in the off the books Black Flagged program. He meets all the requirements and is easily molded into his new identity. And, he is most deadly.

Konkoly’s novella Black Flagged Series Prequel, Inception, is Daniel’s origin story. While he is not the easiest protagonist to like, he grows on you if you continue with the series. It always amazes me the amount of detail and precision the Konkoly goes to in his stories.

I was excited to get this novella at first. It starts off well and grabbed my attention. It is action-packed and very intense. What disappointed me was the lack of information regarding the actual training at General Sanderson’s camp. I wanted more and felt a bit shortchanged. 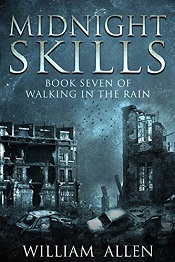 Luke Messner and his fiancé, Amy Landon along with all the other characters you have grown to love throughout this series come together in one final story. Winter is fast approaching and many more will perish. The Messners and their friends that have blended into a small community have prepared as well as they can. With the Civil War hitting closer to home more so now than ever Luke feels he needs to join the ragtag Texas Army National Guard not only to help but also to vent his pent-up anger. Will Luke retain his humanity or be lost forever by those who love him dearly?

Allen’s seventh and final novel in the Walking in the Rain series, Midnight Skills focuses on both the battle between the states and Luke’ inner battle. It is a heart-wrenching tale that brings all the characters together for one last stand. Some will not make it. Those that survive even though physically damaged may not survive mentally.

This is the longest book in the series and is divided into two parts. Somewhere about a third of the way through the editing suffers. There are many mistakes that should have been caught before now. And, even though I thoroughly loved the story and will miss the series I cannot give it five stars with the number of mistakes is has.

While on a mission in Afghanistan four of the remaining squad of Rangers in the 75th Infantry Regiment swore an oath to their dying Sergeant to take care of his family back in the states. And, that they did plus some. So, when the United States starts tearing itself apart under the new administration their efforts become more intensified. It is now a matter of life or death. Will they still be able to keep their promise?

Watson, Allen, and Allen combined efforts in their first novel of the Stolen Liberty series, Behind The Curtain is one of the best political/military thrillers I have read. These three authors have seamlessly brought their talents together in this action-packed book. Having read each of them individually I was unable to tell who wrote which part.

The first chapter of the book was a tough read for me. But, once I read farther into the book I was able to understand its relevance. The book hooked me and was hard to put down. To me, there is never a good place to leave a cliffhanger, but I feel they did a good job on this one. Of course, it made me cry.

I felt the e-book version that I read was a bit rushed to publication. There were quite a few more mistakes than usual. For that reason, I cannot give it a 5-star review. I do however highly recommend the book and look forward to reading the rest of the series. 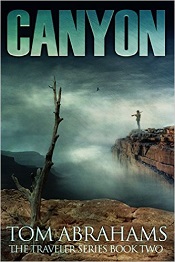 Marcus Battle tries to keep his promise to Lola by leaving his home to find her son. For the first time since the Scourge hit over five years ago he sees the wasteland that remains of the once proud state of Texas. Those that sought him out and destroyed his house are ruthlessly running the Cartel. You either join the Cartel, are ruled by the Cartel, or die by the Cartel.

Abrahams second novel in The Traveler series, Canyon, provides a more in depth look at Marcus’ character. The story pivots between the present and back in time to when Marcus served the military in Syria. I personally found the Syria half of the book boring. It was summed up in a couple of pages in the third book and could have easily done so in this book.

I did enjoy the rest of this book even though it was not as well edited as the first book. 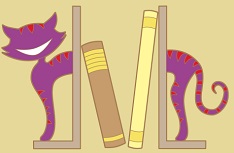