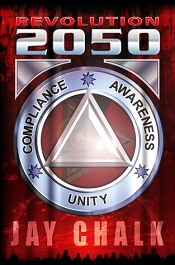 Samuel Aden Moore is a high school teacher for the North American Commonwealth. The NAC is a totalitarian regime that controls the eastern half of the US. Sam is a member of the Directorate which rules the NAC. He has always followed the party line while enjoying some of the forbidden contraband, such as novels and history books.

When some of his students introduced him to the ideology of the Western Alliance his resolve to remain an arm of the Directorate starts to crack. Then Katie Spenser provides him a short-wave radio where he can listen to the WA broadcasts. She also has a video of the death camps run by the NAC. Now, Sam questions everything he has been taught.

Chalk’s novel, Revolution 2050, caught me hook, link, and sinker right off the bat. I dove eagerly into this book and rapidly consumed Part 1. Part 2 was the total opposite. It was long and boring. Chalk even delved into the paranormal here. This section could have easily been condensed into a couple of chapters or for the most part cut completely out of the book. Part 3 recaptured my interest but not to the level as the beginning. The ending left the story wide open to a sequel.

Watching Sam struggle with his morality and grow into a leader was well written. The overall storyline is very original. The similarities with many things happening currently in our real world are eerily concerning. This novel certainly proves Edmund Burke’s quote – “The only thing necessary for the triumph of evil is for good men to do nothing.”

A good editor is needed to clean up and streamline the story. The middle punched the air out of my balloon. Therefore, I am unable to give more than 3 out of 5 stars.

I received an advanced reader’s copy of this book for free from the publisher. This in no way affected my opinion of the book or the content of my review.

Grace Hardwick has managed to travel from her college campus in Oxford, Mississippi to Arthur Bridges’ compound in the mountains of north Georgia. She fled towards home with the supplies and equipment her father had cached for her in a storage facility near the campus. After the coordinated terrorists’ attacks throughout the country, it was imperative that Grace gets home as soon as possible. Her trip has been anything easy and her survival skills have been put to the test more often than not. Along the way, she has teamed up with Tom Brady and his mother, Sonyea. Her father, Robert, has traveled to the compound and plans to help her along with Tom and Sonyea back to their homestead outside of Damascus, Virginia.

When the group decides to split up and send Grace and Tom ahead all hell breaks loose. The Hardwick farm though somewhat isolated has some unexpected unsavory guests wreak havoc on the others in Grace’s family. The Bridges’ compound comes under attack causing a delay in Robert and Sonyea leaving. Grace and Tom run into a ragtag group of stranded hikers that open fire. It seems that fate is keeping everyone apart and their lives in peril.

Horton’s second novel in The Locker Nine Series, Grace Under Fire, is a fast-paced, action-packed, post-apocalyptic dystopian. (Say that three times as fast as you can. LOL) Each of the places is described in enough detail that it is easy to picture them. There are more moving parts to this book than the first and many more characters. It almost became too many to keep up with at times. The budding romance between Grace and Tom adds a sweet relief to all the tragedy happening around them.

This book grabbed my attention right away and kept me tied to the story. I hated to put it down and it ended too soon. I am eagerly looking forward to the next installment. 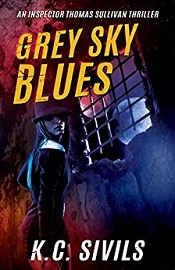 Inspector Sullivan is suspicious when he is called upon to take his team to a prison located on a desolate moon. They are asked to investigate murders that appear to be unrelated other than the lack of motive and evidence. The penal system has its own internal investigators. So why pull the Inspector off-world to usurp their authority?

The gang leaders within the prison are nervous about these murders as they weren’t sanctioned by any of them. For you see, even though there are gangs they still have a code of conduct to which they adhere. And, the thought of an outside investigation happening on their turf challenges their ability to control the prison.

Markeson, Sully’s immediate supervisor is thrilled to send the team off-world. Sarah, the clone with enhanced abilities always makes him nervous. Being a dirty cop and having incorruptible staff snooping around is an annoyance he is happy to relieve himself of even for a short period of time. Who knows? Prisons are dangerous places. Accidents happen.

Sivils’ third novel in the Inspector Thomas Sullivan series, Grey Sky Blues does not disappoint. The writing has become more complex as the supporting characters personalities are expanded. Sivils peppers just enough clues throughout to keep you guessing without losing interest. One could read this book as a standalone since there is enough information about the past intermingled along the way.

Sarah’s past was explored in more depth and it was nice to see her character evolve and mature. We also find out much more about Father Nathan. He isn’t officially part of the team but is called to the prison on business at the same time as Sully. And, Bones, the coroner, is becoming more than a background character. Detective Sergeant Josephson really surprised me with how quickly he has mirrored Sully’s techniques.

Without a doubt, this is the best in the series thus far. The ending was a complete surprise and opens a world of possible sequels. Sivils can’t write fast enough! I am hungry for more.

I received this book for free from the author. This in no way affected my opinion of the book or the content of my review.

Henry Stein is living a life of lies, of secrets, of regrets. Before him now is the toughest decision he has ever faced. He must choose between Israel where he currently lives and has served in the military or England where he was born and raised and became a member of MI6.

Latz’s novel, I Am Not a Traitor, is an international spy thriller. The pace is very slow. It starts with Henry imprisoned suspected of treason against Israel. And, it drags on from there. There is no predictability with the story as I lost interest by chapter 13.

The writing is good. It’s the storytelling that is painful. The first 10 chapters are of him being interrogated repeatedly. Very little is revealed during this time. It had potential.

I received this book for free from the author. This in no way affected my opinion of the book or the content of my review.